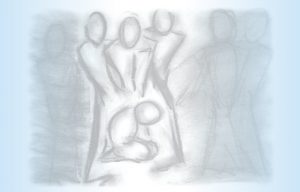 The TGG (the Dutch abbreviation for Transgenerational Organized Violence) Knowledge Center is formed by a group of professionals who, in their work, deal or dealt with survivors of organized abuse.

The foundation wants to bring this form of abuse to the attention of the public with the aim of ensuring that victims are respected and recognized, so that they can be helped and treated more effectively. The TGG Knowledge Center supports this through research, publications, information and referrals.

How do we define Transgenerational Organized Violence (TOV).

We searched for a while for the right words to describe this specific type of organized violence against children.  It was a quest for us to phrase it as carefully as possible. Professionals from Top Reference Trauma Centers, Safe at Home, the Dutch Common Health Service, Fier (Violence in Dependency Relationships Expertise & Treatment Center), STJW [staat voor??] and other experts brainstormed with us. We then revisited our definition during several years in a combined effort.

The definition as it stands today appears to be the final product for the time being but remains open for revision. Hence, we call it a working definition.

There are various forms of organized abuse. Here, we are referring to the form in which transgenerational and organized violence towards children takes place, with the aim of “training” them in such a way as to make them suitable for child prostitution.

TOV involves repeated, organized, systematic and sadistic abuse of people – ranging from babies to children to adults – physically, psychologically, sexually and / or emotionally, usually in groups.